Home INTRO AND RULES What is PickleBall? 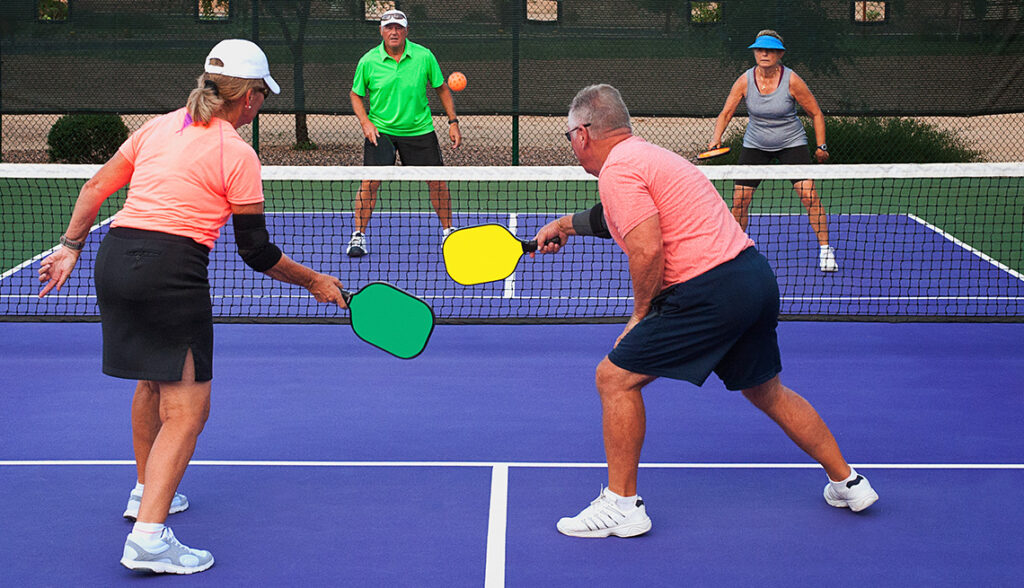 When I first saw PickelBall being played it reminded me of my youth using wiffle balls.

So why are so many now playing it!

I did some research and this is what I found out.

Pickleball was “invented” in 1965 by Joel Pritchard who lived on Bainbridge Island, WA. He “invented” it to entertain his two bored children.

He picked up some Ping-Pong paddles and a Wiffle Ball and started a new game without even knowing it! Little did he know what he started.

Since then PickleBall has taken the United States by storm. It’s the new game in town and especially liked by those getting on in years.

PickleBall is becoming a staple in many adult communities due to its ease on your body while still letting you be active and be outside.

It’s quickly taking over tennis courts as the go-to place to exercise and enjoy the outdoors.

So, what is PickleBall?

Once the game begins, the ball has to be returned to the other side prior to two bounces. Players can only use the paddle or their hand to touch the ball.

The winning team is decided by the one who reaches eleven points first by two points.

Simply put, you don’t have to be a great athlete to play.

Pickleball can be played by just about anyone on a smaller sized court then tennis (about one-fourth the size of a tennis court).

The smaller courts means less ground to cover, less of a cardio sport, easier on the joints/legs while still allowing you some great exercise.

Pickleball can be played as singles or doubles and the service is underhanded further reducing the stress on your body.

After the serve, just as in tennis, the ball can be volleyed or hit after one bounce.

Here are some reasons to take up PickleBall:

1. It’s a really a game you need to master to the level you want to be. Depending on your mindset you can take this game from beginner to pro level.

2. It’s a great way to stay active in your community or town and meet new people.

3. You burn 10% more calories than walking or running on a treadmill or paved surface.

4. Being active helps keep your bones healthy. The more you move the better you will feel. Remember sitting is the new smoking of the 21st century. Use your body or lose it!

5. It’s not that costly. This page https://pickle-ball.shop/ has links to what you need to play as well as tips on improving your game. You can start for as little as $50!

6. Because it reduces stress on your body, more people can play the game and enjoy it without worrying about over-stressing your body.

A note of caution, if you’ve been inactive for some time, check with your doctor and see what he/she recommends healthwise for your activity level.

Pickleball is an easy fun game for all age groups. You can be as competitive as you want and play just for fun or start increasing your skill level to achieve a higher level.

Take a look at this page, https://pickle-ball.shop/ for tips on the game, links to the various paddles avaialble, videos on the rules and so much more.

So what are you waiting for?